Who You Surround Yourself With Influences Where You End Up I moved to Switzerland 3.5 years ago to follow my husband who had started working in Zurich. I came with our two boys aged 3 and 6 and left my full time corporate career in marketing to set up as an independent marketing consultant.

At around that time I read Napoleon Hill’s ‘Think And Grow Rich’ (a personal development classic Hill wrote in 1937). One of the biggest takeaways I learned from the book was that who you surround yourself with influences where you end up, and that a mastermind group is one of the pre-requisites to success in anything.

So as I searched Zürich for meetups and groups that would satisfy my quest, I met some wonderful and inspiring women. I tried some of the free women’s business groups, some of the start-up groups, digital groups and mum groups but couldn’t find the thing that motivated me enough to commit to going regularly.

I’ve been in several paid mastermind groups online – which really did move my business forwards. But after a while I craved human contact, I wanted to get out from behind my screen.

Now, since arriving in Switzerland, I’ve gained some wonderful friends, I’ve failed at one business, grown another and learnt a lot about myself and about what drives me.

I’ve learned to define my own success but I’ve also learned that no-one can be successful alone.

And then at the end of last year I was introduced to Miisa. Instantly I knew that she had the framework I’d been searching for. A real life group, a group to hold you accountable, to help you define your own success and achieve your dreams, in a feminine way. This was the tribe I had been longing for!

When Miisa described how DrivenWoman runs their Lifeworking groups across the world I knew this was the framework and structure I’d been searching for. Since then I’ve been through Miisa’s rigorous training, got vulnerable at a ‘Daring Way’ workshop which is based on Brené Brown‘s research and work, experience the incredible ‘Festival of Doers‘ in London and committed to sharing this exceptional concept in Switzerland.

I’m excited to be running DrivenWoman with Leonie and to start achieving the things I dream of. I’m very eager to start this journey to become accountable for my goals and make my dreams happen with the help of the other driven women here in Zurich.

And what’s more, the DrivenWoman method is backed by science.

Writing down your goals, sharing them with friends, and sending your friends regular updates about your progress is proven to boost your chances of succeeding. Dr. Gail Matthews from Dominican University of California did a study and found three key elements to successful goal setting—accountability, commitment and writing down one’s goals. People who shared their goals with others had a 76% success rate in achieving their goals, whereas those who didn’t, only accomplished 43% of what they set out to do.

It’s this idea of creating positive habits and putting plans into action, one small step at a time, that really resonates with me and I know that as I surround myself with like-minded women, magic will happen.

Fiona Flintham is a DrivenWoman Group Leader in Switzerland and an online marketing strategist. The next Zurich Introduction evening is on 27. march 2017 (tickets) and the member evenings are starting on 29.3.2017.

← Prev: The Happiness Explorer - From The Dole To Five Figure Weeks Next: A Bucket Full Of Dreams → 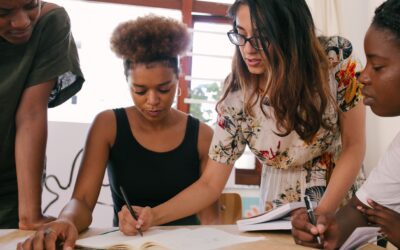 How to Create Your Vision & Plan for The New Year

Imagine if you actually achieved what you always wanted. Got that promotion, presented your innovative idea, made time... How to set goals if you don't know what you actually want. I often get asked this question. There is a dangerous... why you must protect your goals against negative forces

My recent post about women's equality on LinkedIn went viral, but not only in a good way. It erupted a backlash of...